The Hippocratic Oath given by virtually every medical doctor in this country holds that, above all, one must do no harm. 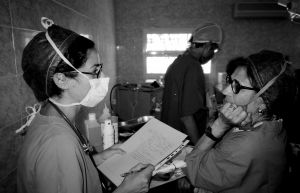 Doctors hold this to be sacred, and that’s why our Los Angeles marijuana lawyers know the issue of medical marijuana can be a difficult one.

On the one hand, it is often more effective than many painkillers, anti-seizure medications and even certain cancer-fighting drugs – minus the awful side effects and addictive properties.

On the other hand, it’s against federal law.

The ethical question becomes, “Am I harming my patient by denying a potentially superior treatment option or by advising him to break federal law.”

The New England Journal of Medicine recently posed a version of this question on its website, with dozens of doctors posting responses.

The exact hypothetical question was this:

A nearly-70-year-old woman has cancer and reports that her nausea and pain are not relieved by the use of standard medication. You are in a state that allows medical marijuana and she said her family has the ability to cultivate it. You are her primary care doctor. What do you recommend?

Some doctors responded that medical marijuana should be prescribed – but only if other “conservative options” – i.e., mass-produced, potentially addictive medications.

Several maintained that federal policy has failed to keep pace with the advances of science, particularly in the realms of pain, nausea and other conditions that don’t respond well to so-called “conservative” approaches.

At this point, we have 18 states that have approved measures for medicinal marijuana. One doctor described marijuana as a horse that had “long ago burst from the federal jurisdictional barn.”

What was very troubling to many of the physicians was the lack of extensive and valid medicinal studies on not only the effects of the drug on certain types of conditions, but also on what types of strains might tend to work best for certain ailments. Any modern studies on marijuana are primarily conducted overseas, as the drug is so strictly controlled in the U.S.

In turn, that means the U.S. Food and Drug Administration hasn’t had a chance to conduct any trials that would show how it compares to other drugs.

What the patchwork of research reveals is that the most common uses for medical cannabis include:

While some doctors noted potentially unwanted psychoactive effects, others noted that versions of the drug, such as Marinol, could significantly reduce those.

Most doctors believe that, in the end, it should be a choice made between a doctor and an educated patient and/or guardian. The federal government, many said, should have little say in that conversation.