Drug sniffing dogs at the airport and other security measures to prevent illegal trafficking and smuggling make flying with drugs seem like an unquestionably illegal activity. But, now that more states have legalized marijuana, residents where pot is legal may be wondering, can you bring marijuana on the airplane? Even if it is illegal for national or international flights, can you fly in-state with marijuana? What about various forms of marijuana? The answers to these questions are not as easy to find out as you might think. 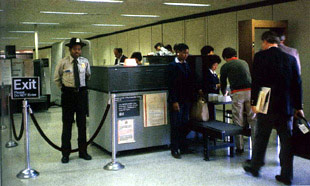 Now that Oregon and Alaska, have joined Colorado and Washington as states where recreational use of marijuana is legal, passengers, airlines, and other authorities will have to consider the implications of these evolving regulations. Beyond the four states where recreational pot has been legalized, there are an additional 23 states where medical marijuana has been legalized. For those passengers who have a legal prescription to possess and use medical marijuana, federal laws could interfere with transport. Patients who are allowed to possess marijuana in their own state are likely to have questions about whether those drugs can be transported, either by car or air.

Under federal laws, marijuana is still considered an illegal Schedule 1 narcotic. The category describes the drug as having a high potential for abuse and “no medical value,” even though it has been shown to easy symptoms of epilepsy, treat pain, alleviate cancer side effects, and possesses a host of other remedial effects, including the ability to treat post-traumatic stress disorder (PTSD) in veterans. Since federal law does not distinguish between medical or recreational pot, any form of marijuana is considered illegal.

Furthermore, airports, air space, and security are under federal jurisdiction, meaning that even a legitimate medical card holder can be charged, arrested, and prosecuting for attempting to travel with marijuana. Despite the seemingly hard and fast rules about flying with marijuana, recent trends suggest that policies may be loosening. According to a TSA official statement, the officers do not search for marijuana or other drugs. In the event that the agency finds marijuana during the routine screening, it will refer the issue to a law enforcement officer. The agency also points out that whether or not marijuana s legal under local law is irrelevant. Federal law treats medical marijuana the same as recreational use marijuana. In essence, TSA describes its role as focusing primarily on the safety of passengers, not checking for the illegal possession or transport of marijuana.

According to reports, local police where medical marijuana is legal have been known to verify a passenger’s documents, and allowed them to fly with medical cannabis if documentation is in order. Still policies in Colorado ban pot at the airport, but passengers will not be penalized if they are found in possession. Our Orange County medical marijuana attorneys are experienced in representing individuals who have been arrested and charged with a crime. We can also advise marijuana dispensary owners on how to set up their business to ensure regulatory compliance. Our team is abreast of changes in marijuana law so that we can protect the rights and interests of our clients.