A university in Michigan is breaking new ground on higher education by offering an advanced degree in marijuana. 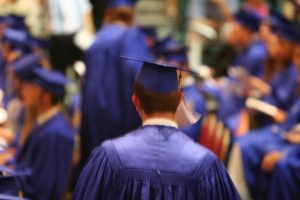 The program at Northern Michigan University in Marquette involves medical plant chemistry, and it started just this semester. About a dozen students are enrolled in the class, which combines horticulture, botany, biology, chemistry, finance and marketing. The program is unique in that, while other schools do offer classes on marijuana law and marijuana policy, none other offers this kind of comprehensive coursework. First off, it’s not a single class but a full, four-year degree. Secondly, it addresses both the science and business aspect of marijuana cultivation and sales. Graduates will be uniquely situated to open their own marijuana business.

Although there are some joking about the ease of such a program, those who are enrolled in or teaching it say it’s not simple at all. The coursework is complex and varied.

The one major downside of the program is that students won’t actually be learning to grow marijuana, at least not at this juncture. The federal government has long made it difficult for universities to study the drug, given its continued Schedule I status under the Controlled Substances Act, which was passed in 1970.  The law organized drugs into schedules based on the potential for abuse and addiction, as well as the possible medical benefits. Marijuana was grouped into the same category as heroin and ecstasy, which are deemed to have a high potential for addiction and no recognized medical benefits. These restrictions have remained stringent, despite the fact that more than half of all states and D.C. have legalized marijuana in some form. An increasing number, including California, have approved marijuana for recreational use and sales.

As it now stands, $1.1 billion of $1.4 billion allocated by the National Institutes of Health for marijuana research went to the study of addiction and abuse. Only about $300 million was dedicated to researching the potential medical benefits for those who suffer things like seizures or chronic pain.

If Congress were to reclassify marijuana as a Schedule II narcotic, which is really the more appropriate category, it would become much easier to study, and programs like the one at Northern Michigan University might become more common.

University administrators say the program fills a void that exists when 29 states have agreed to legalize marijuana as medicine, while eight have legalized it for recreational use. Our marijuana business attorneys in L.A. know dedicated, intelligent, thoughtful individuals – with an expensive knowledge of every aspect of the industry – will only become more essential. Whether such degrees will soon become an industry standard remains to be seen. There is at least one other similar program, though it is not conducted at an accredited university. A 12-course program offered by the Northeastern Institute of Cannabis in Massachusetts, the operation is funded by private backers and teaches students various elements of the cannabis industry. Those who complete the course will receive a “Cannabis Industry certification.”

Voters in Michigan approved the legal use of marijuana for the treatment of certain medical conditions. However, because of restrictive federal law and unclear state guidelines, implementing the measure has proven difficult. Nonetheless, it’s expected the government will soon begin collecting marijuana dispensary licensing applications in mid-December.