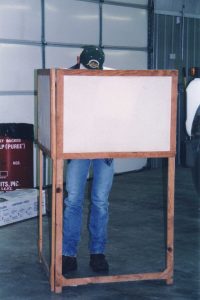 the growing list of places where either recreational or medical marijuana is legal. Two of the states — Utah and Missouri — currently have no marijuana protections and would be looking to add medical. The inclusion of these two would bring the number of states with some form of legal cannabis to 32. Meanwhile, Michigan and North Dakota are no strangers to marijuana legislation, each one already having medical marijuana permissions in place while looking to move forward into recreational cannabis in November.

According to The Motley Fool, early polling shows Michigan is expected to be a close call in their ballot initiative to legalize recreational marijuana. Proposition 1 would permit use and possession of marijuana for those 21 and older as well as sales and taxation on those sales. Under the measure, 12 plants would be allowed for personal growth in private residences. Like California and other states, though, cities and local governments would have the right to ban or regulate businesses in their jurisdictions. A 10 percent excise tax on retail sales would go toward education and be divided among local coffers.Measure 3 out of North Dakota is the other recreational bill this year. In addition to opening the door to setting up adult-use marijuana regulations, this initiative takes the extra measures of building in an automatic expungement process for those with prior convictions related to marijuana. In California, Proposition 64 allowed those with previous convictions to petition to have their records clear. Later, some cities initiated automatic reviews, and now AB-1793, if passed, would implement an automatic expungement process in the state. Support for recreational legalization is mixed, though our experienced Los Angeles marijuana lawyers know other conservative leaning states such as Oklahoma have proven cannabis is a bipartisan issue.

The medical marijuana measure in Utah is pretty straight forward and in line with other states. Proposition 2, The Utah Medical Cannabis Act, would create a system that would establish a list of qualifying conditions, regulations for doctors, rules for purchasing marijuana, etc. Polls are showing strong support for medical cannabis legalization, making chances for success of this bill higher than some of the others in November.

Meanwhile Missouri is anything but straightforward with three medical marijuana measures appearing on the ballot. The primary differences among the three pertain primarily to the rate at which sales would be taxed, and what that money would be allocated toward. Proposition C would have low taxes, high expenses ($10 million), and revenue going mostly toward enforcement, education, and veterans health services. It would not require a constitutional amendment, though, while the other two will. Amendment 2 is more middle-of-the-road with a slightly higher tax rate of 4 percent, lower (but still costly) operating costs at $7 million, with revenue flagged specifically for veterans healthcare. It is the only one that allows residents to grow their own plants, though it would have to be in a registered facility. Amendment 3 has the highest tax rate at 15% but the lowest costs overall at only $500,000. Revenue for this option would go toward research for incurable diseases. Given overall support nationwide for medical marijuana, one of these three is likely to pass, though confusion over conflicting ballot initiatives could cause issues for the state, particularly if more than one passes.