Taxation of legalized marijuana is slated to boost funds for homeless services in L.A. County. That’s if a ballot measure, just approved  by the L.A. County Board of Supervisors, is green-lighted by local voters. 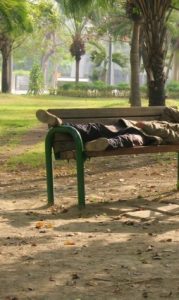 Following a four-hour public hearing on the issue, the board agreed in a split 3-2 decision to impose a county-wide tax on recreational marijuana – if it’s approved by voters statewide in the fall.

This action pays lip service to the confidence county leaders have that the Adult Use of Marijuana Act Initiative is going to pass in November. If both the state and local measures are approved, that could mean an estimated $80 million to $130 million annually helping the homeless in L.A. County. That’s based on projections of a 5 to 10 percent sales tax on recreational marijuana.

It’s remarkable sum when you consider that not only is this money that homeless services currently does not have, but it’s money that would otherwise be going to pay black market drug dealers.

The dissenting board members voiced concerns that if homeless services organizations came to rely on marijuana taxation as a source of revenue, they may find it to be unreliable. One board member instead voiced support for a quarter-cent sales tax option, as did many people who spoke at the public meeting. It was estimated that option could drum up $355 million a year. However, he insisted it was too early to impose such a tax, and no decision should be made at least until the state measure passed.

Homelessness in L.A. County is a serious problem, and officials have estimated it’s going to take approximately $450 million annually to address it appropriately. That includes efforts to arrange for faster housing placement and supplying mental health care and substance abuse services.

There was a push for state lawmakers to approve a measure that would allow the county to tax the top earners in the region. However, the legislature did not take up the issue before closing out the session.

The proposed marijuana tax was staunchly opposed by marijuana advocacy group Americans for Safe Access, among others.  The group asserted marijuana users – particularly those who use it for medicinal purposes – are taxed enough as it is.

The action was also sharply opposed by L.A. County Sheriff Jim McDonnell. Although he urged action on the issue of homelessness, he is fervently opposed to the legalization of marijuana for recreation, and thus could not support any measure that involves taxation of the drug.

L.A. officials declared a state of emergency in 2015 after it was revealed there were 40,000 people in the region living in tents, cars and on the streets. The county has dedicated $150 million annually to help address these issues, but they have quickly found that’s not been enough.