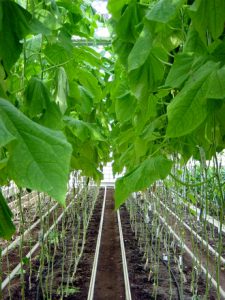 There are grow operations that use massive indoor spaces, some as big as 200,000 square feet, which is around the size of a big box store, to grow marijuana in a traditional growing medium.  These indoor grow operations are secure and have special features to keep any types of mites or other pests from getting to the plants.  Modern ones require workers to wear clean suits with no pockets, and then they must go through a wind tunnel prior to coming in contact with plants to keep the pests away.  The air in these large medical marijuana operations is recycled multiple times a day or even a few times an hour to make sure there is not any contamination. In addition to this technology, the new grow operations treat the air that is removed with commercial scrubbers and even aromatherapy to make sure they are not making the whole neighborhood smell like marijuana.   While these new facilities that are being built across the country can certainly be considered cutting edge, they are not cheap.  In fact, they can cost more than $10 million each to construct and fully equip.

This is okay for big companies and venture capitalists, but for many smaller operations, they cannot come close to affording anything like this.  It is for this reason that outdoor operations are still very popular.  However, according to a recent news article from CBS, the City of Santa Rosa is trying to outlaw any outdoor cultivation of marijuana. This includes a patient with the up to six plants he or she is allowed to cultivate as well as any commercial medical marijuana manufacturers.

As if this was not annoying enough to people that want to grow plants for personal use, the city is seemingly doing it based upon the passage of Proposition 64 that gave more rights to medical marijuana patients and now recreational users.

The city says that it is responding to complaints of the smell of outdoor growing, even when we are talking about a couple of plants and certainly no more than six.

One thing to keep in mind, if you are cultivating medical marijuana, is that the local municipality may try to infringe upon your rights when they are not technically allowed to do so.  This is not to say they do not have authority, but if you are being told you need to stop cultivating marijuana or are issued warnings or fines, you should speak with an experienced medical cannabis attorney to learn what your rights may be and to see if you have a valid defense or even a claim of your own.