The “War on Drugs” has been an epic failure by many standards, particularly with regard to marijuana. The harm that has been inflicted in the course of this “war” – the gang fights over the black market, the sky-high incarceration levels of minorities, police killings and more – has far outweighed any sliver of benefit society might have gained. 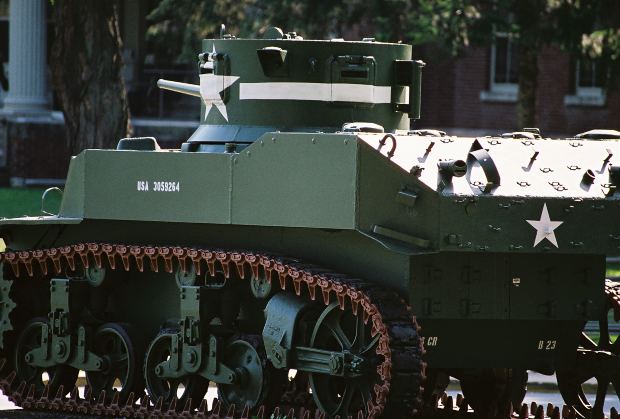 It seems the federal government has in some respects recognized this, and has dialed back the rhetoric and scaled back enforcement. At least to some degree.

However, it continues to allow local law enforcement to up the ante through the Pentagon’s 1033 program. Through this initiative, police departments can request access to surplus military gear. Most notably, armored trucks and other military vehicles that are left over from wars in Afghanistan and Iraq. Historically, these have included:

This show of force in ordinary communities is, to say the least, startling, though the purpose was initially – and still largely is – to help local communities to fight the “war on drugs.” The program expanded after Sept. 11, 2001, as the federal government noted the need of local law enforcement to be prepared for future attacks. But largely, this equipment is still just being used against our own people, mostly for marijuana enforcement in the states where the drug remains illegal.

While the Obama administration has recently placed limits on the Pentagon’s 1033 program, including what kinds of equipment local police chiefs and sheriff offices can request, armored vehicles are still available.

So what drugs are so dangerous that they require military-style intervention to eradicate? Marijuana, mostly. Methamphetamine too. But mostly marijuana.

Mother Jones recently received documents related to a Freedom of Information ACT (FOIA) request, following suspicions raised when hundreds of police officers descended on Ferguson, Missouri last year amid riots for the shooting of an unarmed black teen. Those officers were decked out in full riot gear, armed with assault rifles and packed into mine-resistant vehicles. They stormed crowds with rubber bullets and tear gas canisters. It looked like a war zone, and indeed, some lawmakers decried the treatment of protestors as “enemy combatants.”

Records requested from the federal government show billions of federal dollars have been used to aid local law enforcement agencies in arming themselves with combat-style trucks, weapons and armor.

While some police advocates insist no community is safe from the potential for terrorist attacks, hostage situations or mass shootings, those are NOT the reasons these agencies most commonly cite to the federal government in their formal requests for this gear.

In the 450 requests reviewed by journalists over the course of the last two years, a full quarter indicate they need the vehicles for drug enforcement. Almost half stated they are in a region with “High Intensity Drug Trafficking,” even though only about 15 percent of counties nationally have been formally identified as such. One in six departments indicated the intent was to use these armored vehicles to carry out arrest or search warrants of those accused (but not convicted) of a crime. More than half indicated they were necessary for local SWAT raids. When The Ohio State University’s police force requested a military vehicle, it was for “football missions.”

Meanwhile, only eight percent of those requests indicated there was any possibility they might need the vehicle for a situation with an armed, barricaded person. Seven percent cited hostage situations. And six percent cited the need for armored vehicles to deal with active shooters. Less than that mentioned any possibility of terrorism or threats to officer safety.

Those who study police militarization note that while many agency leaders will publicly identify situations like Columbine as justification for needing this type of equipment, they will concede among each other that such cases are extremely rare.