Marijuana has been legalized – slowly – in more than half the states in the U.S., either for medicinal or recreational purposes (26 in all). And yet, the National Collegiate Athletic Association (the non-profit that regulates athletes in some 1,300 programs and organizes athletic programs in many colleges and universities throughout the U.S., overseeing some 450,000 college athletes) continues to test college athletes for marijuana. Those who test positive still face substantial punishments – up to an including expulsion from the team. 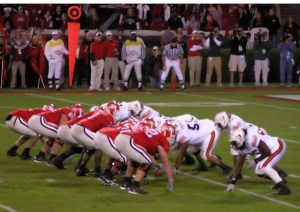 This is true even in states like California, Colorado and Washington, where the drug is legal for those over the age of 21.

Recently, CBS Sports polled college coaches – anonymously – for their views on college athlete marijuana use and whether it should continue to be penalized the same way, given the current legal climate.

When asked whether marijuana should be legalized nationally, 52 percent of coach respondents answered no, 35 percent said yes and 13 percent had no opinion. When asked if college athletes should still be tested and suspended for marijuana use, 74 percent of coaches answered in the affirmative. Eighteen percent said no and 8 percent had no opinion.

When asked to explain their views, comments varied. Some echoed the old adage of marijuana as a gateway drug, one that opens the door to opioids and other dangerous narcotics.

However, several others had a softened stance. Once coach explained that after spring break one recent season, 30 of his players tested positive for marijuana. He noted many of the athlete’s parents smoked, they grew up with it being considered morally and socially accepted, and now it’s legally accepted in many places.

Another coach noted the disparity for teams that test for it versus those that don’t. Even in states where the drug remains illegal, he said, it doesn’t make sense to continue to test athletes when schools in competing universities no longer do it.

Some took the position that young minds are completely formed until age 26, and voiced concern about the impact of the drug on player’s minds.

On the whole, our Los Angeles marijuana lawyers have seen a shift in societal norms and attitudes regarding usage. As far as sports, marijuana is not considered to be performance-enhancing. Some are even referring to marijuana as “the new six-pack.”

The NCAA itself, which began drug testing players in 1986,  has taken a less harsher stance on the drug. In 2014, the Legislative Council approved a measure that reduced the penalty for a player’s positive marijuana test from a full season to a half season. The NCAA no longer treats the issue as a criminal matter, as it once did, instead referring students to campus intervention, with encouragement to provide “necessary rehabilitation.” Even these penalties are relatively rare, given that the rate of positives has consistently hovered at around 1 percent. The organization now only tests for marijuana during championships.

Still, a college athlete who is arrested for a drug crime will be subject not only to criminal prosecution, but also additional sanctions from the NCAA and the university. Schools vary in how they handle criminal matters, but most universities and colleges have an extrajudicial process in order to address alleged or admitted violations of the school code of ethics.