A U.S. Navy soldier returned from tours in Iraq and Afghanistan to his home in Colorado, where he began to suffer flashbacks of combat, panic attacks, haunting nightmares, white knuckle anxiety and crippling depression. He also suddenly had a stutter and he had a hard time with short-term memory. 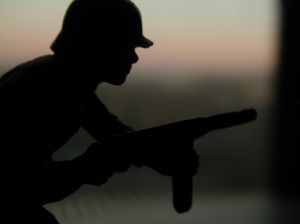 Our Los Angeles marijuana lawyers know that all of this is a clear case of Post Traumatic Stress Disorder and traumatic brain injury, making him what many doctors believe would be a perfect candidate for medicinal marijuana treatment.

But before he sought that out, he tried to self-medicate with alcohol. That did not go well. He continues to serve probation for three DUIs he received in short order.

Now enrolled in school and regular therapy sessions, he is reportedly doing well. His prescription for medical marijuana is helping to stabilize him mentally and physically – but not legally.

The fact that he uses marijuana at all is considered a violation of his probation. As such, he is facing jail time for it, according to The Greeley Tribune.

As the soldier himself put it, courts may be black-and-white, but his conditions make him the practical poster child for the gray area in between.

The soldier had served as a combat medic. Not only did he witness atrocious injuries and horrific, bloody scenes playing out almost daily, he was actually shot in the side of the head while in a helicopter. That was the source of his stutter and memory loss.

He remembers the “snap” sound, but nothing after that – something he says is probably a good thing.

After being treated at a hospital in San Diego, he was released with zero support. He said as he wandered around the city, an extreme sense of paranoia crept over him. As he tried to get back to normal, he couldn’t sleep. Flashbacks of gunfire set him into a full-blown panic.

In the years that followed, he racked up his DUIS, a harassment charge and a protection order. His probation sentences were twice extended because he didn’t start his DUI classes soon enough, though at the time he was seeking help for his PTSD at a local Veterans Affairs hospital.

However, a judge denied him the right to continue to use medical marijuana while he served out the rest of his probation. In turn, he obtained a prescription for a drug called Marinol, a costly, synthetic version of the drug that contains its active ingredient.

He’s now sober and a junior at the local community college.

His teachers and advisers say they have seen a marked improvement in him since he began using medical marijuana and Marinol. It’s clearly helping him, they say. And yet, it’s causing him grief.

Marinol costs nearly $20 per pill. Medical marijuana is far less expensive. Forcing him to pay for the alternative, he says, isn’t fair. And he’s right.

But he now faces up to a month in jail for failing numerous drug tests given for his probation. All of those violations were for medical marijuana.

His doctors, even those with the VA, have written to the judge, asking for leniency, explaining how much the drugs have helped him. So far, it’s been to no avail.

Veterans who are also medical marijuana patients shouldn’t have to suffer this way. If you have found yourself in a similar situation, call us today to learn more about how we can help.