California may have legalized recreational cannabis, but questions carry on over how “in-your-face” the public messaging should be. State legislature rows are brewing over splashy marijuana business billboards that have been erected across the state. As our Los Angeles marijuana business lawyers can explain, such advertising is considered essential by industry insiders who rightfully point note the legal market is barely treading water. Opponents, however, argue that such ads incentivize a potentially harmful substance to impressionable youth. 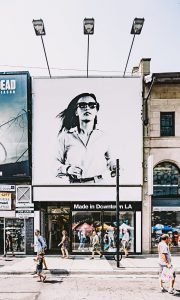 Assembly Democrats have introduced two competing bills that would allow for two very different approaches to public advertising of cannabis businesses and their products. The more restrictive CA AB 273(21R) would prohibit any cannabis-related billboard from being visible from a highway. The other, CA AB 1302 (21R) would allow billboard advertising of cannabis companies along most thoroughfares in the state, but it would discourage sales interstate, which is still unlawful at the federal level, by banning marijuana billboard ads within 15 miles of any highway border into another state.

Although advertising may seem like a minor detail, the reality is some of these nuances could have a significant impact on the legal cannabis market in the state. Consider that the biggest tech companies – Google, Facebook, and YouTube – effectively ban cannabis marketing to online consumers. That means outdoor advertising is crucial for the marijuana industry. Prohibition that unreasonably restricts content and placement is going to further impede any business’s ability to effectively compete against other providers, particularly in markets teeming with unlicensed businesses that sell cheaper products because they are uninhibited by taxes, regulatory fees, compliance testing, etc.

Cannabis analytics company New Frontier Data reports that approximately 8 in 10 cannabis sales in California are made on the black market. That’s $8 billion in product. Legal providers are competing with other outlets that have substantially lower overhead because they aren’t operating according to the stringent rules set forth by the state. There is a lot that needs to happen to happen to rectify this, but further restricting the reach of legal businesses isn’t going to help.

In early 2019, the Bureau of Cannabis Control handed down regulation that constricted cannabis ad prohibition to within 15 miles of state borders. However, a San Luis Obispo Superior Court resident challenged that regulation in court, arguing the ads subjected his children to inappropriate cannabis content. Late last year, a judge ruled that the BCC’s regulation failed to adhere to the language in Prop. 64, compelling cannabis companies statewide to begin tearing down their billboards.

However, cannabis company lawyers note that the decision didn’t touch on whether the intention of language in Prop. 64 was to shield cannabis marketing from the view of minors or instead to discourage interstate commerce of cannabis products. The sponsor of CA AB 273(21R) said she believes the authors of Prop. 64 wanted to keep marijuana advertising off highways period, citing the restrictions on outdoor advertising as well as numerous sections clearly written to curb child exposure to cannabis content.

State law does ban advertising of cannabis on city streets within 1,000 feet of K-12 schools, playgrounds and daycare centers. There are also right rules about the kind of images that can be used to promote cannabis products (trying to avoid a Joe Camel cartoon debacle). The law also restricts digital and physical marijuana marketing to locations where one can reasonably expect that at least 70 percent of the audience is over 21 years of age. Some ad companies argue this can easily be asserted on highways, but supporters of AB 273 question how that might be established.

Those who want more stringent advertising rules point out that minors tend to suffer greater negative health consequences with cannabis than adults. They don’t want to send the message that cannabis use is totally safe, noting that usage rates among minors increases as risk perception decreases.

But there are those who staunchly disagree the ads are going to have much impact on whether or to what extent young people use. What will have an impact is a booming black market with few safeguards to prevent sales to minors. Restricting advertising of legal marijuana businesses is only going to further limit their sales and give yet another leg up to proprietors of illegal pot operations.

Our cannabis business lawyers are committed to helping companies navigate the legal minefields of marketing, sales, copyright and trademark.