The California cannabis industry was one that was truly forged from the bottom-up. But now, it’s the little guys who are increasingly finding themselves on top – specifically, the top shelf. And bottom shelf. And off to the side. That’s not where they’d like to be, given what everyone knows of consumer buying habits – particularly when purchasing on impulse. Prime shelving these days, however, is coming at a premium at local pot stores. Retailers are reportedly charging a pretty penny for those eye-level or feature case spots. 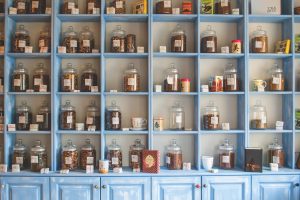 Los Angeles marijuana business attorneys recognize that not only does this practice (with some retailers reportedly charging anywhere from several hundred dollars to $50,000 monthly just for product placement) squeeze out the mom-and-pop pot ventures, it may be legally questionable.

In fairness: Everyone in the state’s marijuana market is squeezed pretty tight at the moment, between cumbersome regulation and a black market that threatens to crush the legal competition. That’s exactly how many industry insiders say this all started: Cannabis retailers pushed to the brink by back-alley black market suppliers undercutting legal sales.

But now, in cities like Los Angeles and San Diego, suppliers are being charged for the actual length of shelving they’re seeking, where those shelves are and in how many stores (for those retail outlets that have several brick-and-mortar shops). The problem is reportedly worse in Northern California.

Several smaller cannabis start-ups say they simply can’t compete with the bigger brands. They opine it’s only going to get tougher, not only because those bigger firms are siphoning sales for which they’d otherwise have a fair shot, but because this is critical juncture for companies to build brand loyalty.

Such practices, commonly referred to as “slotting fees,” not only have potential to put a major hurt smaller craft brands, but as our Los Angeles marijuana business attorneys can explain, they could run afoul rules against unfair competition.

It’s something of a gray area for the cannabis market. Technically, the California Bureau of Cannabis Control doesn’t have any slotting rules specifically pertaining to marijuana or hemp sales. Generally in that scenario (as we so often do as cannabis lawyers), we’d look to see how the state handles the similar issues for different industries. But here, the rules conflict.

For example, slotting is very common – and perfectly legal – in many big-name grocery stores and retail departments. Dispensaries are retail outlets, but store owners aren’t selling cereal or jackets. They’re selling a heavily-controlled substance, which could mean the more relevant regulations are those pertaining to the liquor industry, in which slotting is expressly banned in all but very limited circumstances.

But, the reality is we don’t have a clear-cut answer until legislators, regulators or the courts make a call on it.

Can L.A. Cannabis Manufacturers Push Back on Slotting Fees?

In the many years since our Los Angeles marijuana attorneys have been practicing, this did not crop up as an issue much if at all until quite recently. Now, we’ve had numerous cannabis growers and manufacturers reach out for help as they tried to negotiate these fees with retailers.

Yet so far, no manufacturers have filed formal complaints with the state. Many cannabis lawyers here recognize this is almost certainly an issue that’s ripe for litigation – because some suppliers will have no choice but that or go under. The big question will be: Are cannabis retailers more like grocery stores or liquor stores?

However, unless and until there is more guidance, particularly considering unfair competition laws are largely untested where the state legal marijuana market is concerned, it’s likely these matters will be resolved on a case-by-case basis.