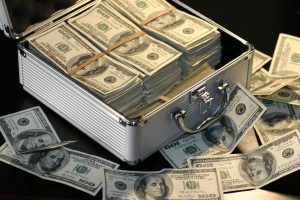 The sheriff would later say he was surprised at the brazenness of the offer, but with the state’s black market for cannabis estimated to be quadruple the size of the legal market for the drug, with an estimated value of $3.7 billion, some officials say bribery attempts and corruption aren’t surprising. Some attempts are more successful than others. For instance, the mayor in Adelanto faces trial on charges he accepted a bribe for agreeing to fast-track one cannabis business over another.

In Humbolt County, the sheriff’s office arrested one of the county’s building inspectors alleged last year to have accepted more than $100,000 in bribes from cannabis businesses for which he promised to help expedite county permits.

Another state representative’s employee has been found guilty of extortion and bribery charges, after reportedly took cash from an FBI undercover agent in exchange for unwavering support for a pot dispensary located in Compton that city leaders were fighting to close down.

Just recently, a developer was accused of offering  bribes to city officials he hoped would help him secure a permit so he could legally operate a marijuana dispensary in Oakland. He included offers of $10,000 in cash and a free trip to Spain. Those individuals each reported the offer to the city administrator’s office. (The accused flatly denies the allegation, saying his version is “wildly different” than the one officials portrayed.)

There was also recently the case of a Los Angeles County Sheriff’s deputy who just pleaded guilty to robbing a marijuana warehouse of half-a-ton of cannabis while, with the help of co-conspirators, while telling city officials who responded to the scene that he was conducting a raid as part of a larger investigation.

But it didn’t start with the advent of legalized recreational marijuana. Six years ago in the city of Cudahy, the former mayor was convicted and sentenced to 1 year of federal prison for pledging his support to open a medical marijuana dispensary there. Others involved reportedly included a councilman and a code enforcement official.

Ultimately, it seems part of the bigger issue isn’t that marijuana is legal, but the fragmented way in which regulations are implemented and enforced. Aside from the conflict of federal and state law, we have a situation where local officials – who are more accessible than those on the state or national stage – have a significant amount of power in deciding whether to allow dispensaries, how many, which ones should get priority and in enforcement actions against black market operations.

Aligning federal, state and local standards could go a long way toward shedding the cannabis industry for this problematic issue.

California is awash in cannabis cash. Some is being used to bribe public officials, March 17, 2019, By Patrick McGreevy, Los Angeles Times